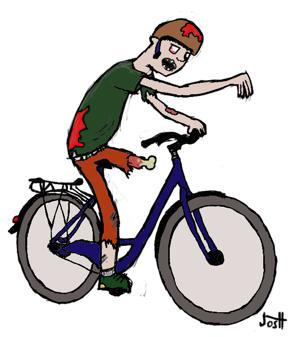 Why is it that in all zombie movies and TV shows nobody0 is using bicycles? Bicycles are a much saner way of transportation, not only in today's cities, but also (or even more so?) in a future zombie-or-not apocalypse:

A common trope in zombie movies is that people need to get gas for their car, only to be attacked by some undead while doing so. A bike needs no gas. You'll never need to try to activate a gas pump or harvest gas from abandoned cars. No attacks by the zombiefied attendant. No need to shoot little girl-zombies1...

Bicycles are easy to maintain

It's much easier to keep keep a bike working than a car. With a little bit of practice anybody can maintain a bike. If something does break, it's rather easy to fix and/or replace. You don't need any fancy tools to repair your bike, especially no power tools. You don't have to worry about your bike not starting while the zombies approach. No need to stop because "the radiator hose broke again"2.

With a bike, you can just go between all the broken cars filled with undead blocking the road. You do not need to stop because there's a huge traffic jam of dead cars3. You can also just turn around and go in some other direction should you suddenly be confronted with zombies in front of you.

You cannot get stuck

A car can get stuck (or decide not to start..) and be surrounded by zombies. And even though a car provides some protection, a determined group of zombies will probably still smash through the windshield and get you sooner or later.

No attacks from the back seat

You won't be attacked by the passenger on the back seat who just turned4 - unless you ride a tandem...

A bike is fast enough

On a bike, everybody can outrun a regular zombie. I guess most people could also outrun a "fast zombie"5.

You can carry enough stuff

If you feel that an overland journey is the best thing to do in a zombie apocalypse (and a lot of characters seem to do so), you can still carry enough stuff on a bike. At least if it's a proper bike with a rack, so you can use panniers. You can also use a bike trailer for more portaging power (but this would make your bike a bit less maneuverable).

This is even more true for shows like Revolution, where people constantly walk very long distances carrying ridiculously small backpacks.

You can cover long distances

If the area is flat enough, doing 100km a day is quite easy. Yes, a car will get you further, but only if you have the gas and there are no obstacles.

You can carry the bike

No more leaving behind all of your stuff because of some obstacle. Just carry the bike! OK, it may take more than one go if you got a lot of luggage, but I guess that's still better than leaving all your equipment behind. Or having it stolen by two con-girls6.

You can go off-road

As long as the countryside isn't too rough, you can just go cross country. There are lots of small paths that you can easily cycle on (even with luggage).

You can just drop it and start running

If things get really tough you can just jump of your bike and start running. No fiddling with doors and seat-belts necessary, just run, hide and collect your bike when things have cooled off.

A bike is silent

You do not attract unwanted attention by announcing yourself with the sound of your combustion engine.

Riding a bike is safe

You're much less likely to injure or kill yourself on a bike than when driving a car. Especially if the roads are full of crashed cars, wandering zombies and general debris.

Zombieland even has two rules regarding the dangers of driving under the influence of zombies: #4 "Seatbelts" and #31 "Check the back seat". Lory once crashed her car and was nearly eaten before regaining consciousness7.

Riding a bike keeps you fit

Do screenwriters never let their characters ride bikes in zombie movies because this would kill a lot of plot options? Or are screenwriters & producers still stuck in the automobile age and do not realize the benefits of cycling in a zombie apocalypse8, because they themselves never do it?

What do you think: is the lack of bicycles a conscious decision for plot reasons, or are bikes just not perceived as a real transport option yet?

PS: Thanks to Josh for the nice illustration!

0 As far as I remember, there's only on occurrence of a bicycle in The Walking Dead: Right after Rick stumbles out of the hospital he grabs a bike and rides it into town. But he hasn't really arrived in the zombie apocalypse yet, and he isn't even wearing proper clothes (only the bare-backed hospital thingy), indicating that real zombie killers don't ride bikes.

4 Shaun of the Dead, Dead Set

8 Which by the way are the same benefits bikes have over motorized private transport ("Motorisierter Individualverkehr") in our real world.