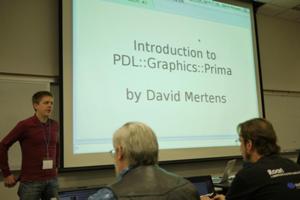 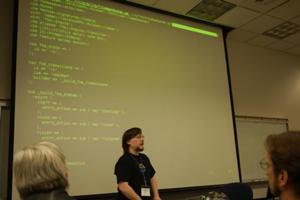 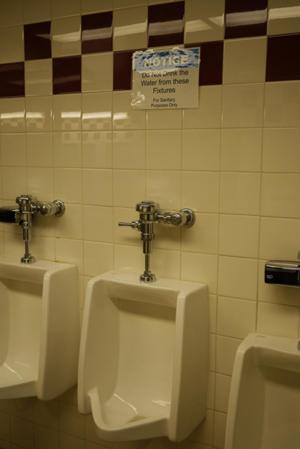 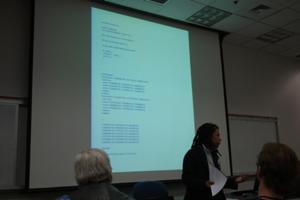 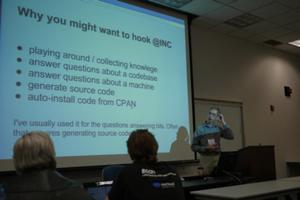 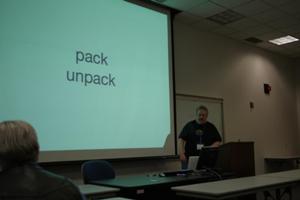 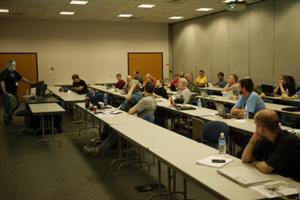 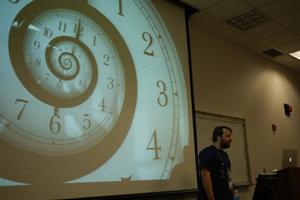 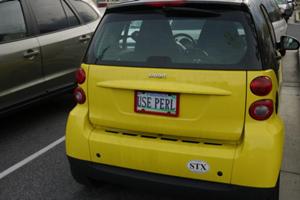 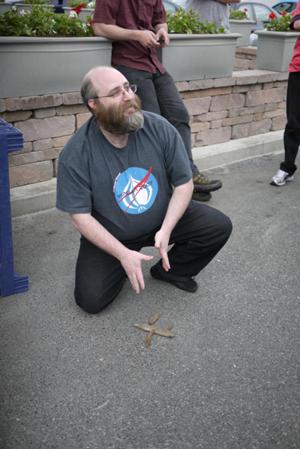 Last Saturday I attended my first-ever Perl event in the USA, the 2012 DC-Baltimore Perl Workshop, which was conveniently scheduled to happen right in the middle of our 3 week holidays in New York and right after our 2 day meta-holiday in Cape May (nice village, we got to see dolphins in the wild, and I ate a spider-sandwich (ok, it was fried soft shell crab, but it looked just like a spider)).

On my way to Baltimore I was picked up by rGeoffrey and Walt in Philadelphia, and we had a nice drive through several states to the pre-workshop meeting, which was delicious and had cider. The hotel offered rather big rooms, which resulted in a hotel room party featuring lots of Perl and non-Perl talking and rather strange, semi-homebrewn whiskey-like beverages (provided by genehack, who will probably want to kick me for calling whatever the correct identification of his drinks is "whiskey") - and Cherry Coke!

The proper workshop happened on Saturday (starting rather early, but it also was a long evening..). There were two tracks, but I spend all my time in the "Awesome"-Track:

Before dinner there were some interesting discussions on the parking lot regarding Perl-themed vanity plates and rod logic (using primitive tools). Dinner itself happened at an Italian restaurant, so there was lots of pizza and some noodles. Afterwards there was yet another hotel room after party, which again was fun (even though we resisted the urge to sharpie 💩 on the forehead of the guy who fell asleep...)

I enjoyed the DC-Baltimore Perl Workshop a lot, because besides hearing interesting Perl talks and meeting lots of cool and friendly people, I also learned a lot about American culture (from sports over the wicked imperial "scale" to kids TV programs, and a lot of other stuff).

Thanks a lot to the organizers who set up a great workshop, to the sponsors (CargoTel, CCBC, Booking.com" and RefWorks COS), the speakers and attendees. Special thanks to rGeoffry, waltman, dha and Philip Hood, who were kind enough to give me rides to and from the hotel, the venue, Philadelphia and New York.