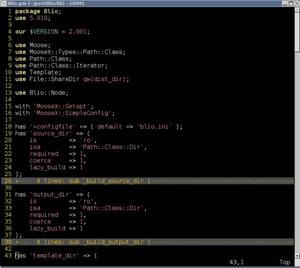 I call it an '"engine"'0 because Blio is basically a slightly enhanced and streamlined (for my use cases, at least) ttree, or yet another pre-clone1 of jekyll.

In other words, it takes a bunch of plain text files containing some simple headers and some content, runs them through some templates, and writes out some html files for static serving. Blio also does some other things (most notably image handling, powered by Imager) which I will tell you about in some future blog posts. As I've learned while pushing to github, this repo even started out as subversion repo in February 2005, but I think some code (or at least ideas..) even predates that.

The only downside of static content is the lack of commentabilty2, but since the advent of services like disqus this problem just disappeared. Well, it's replaced by another problem, namely submitting your readers to shameless tracking by third parties, but what's a lazy hacker to do?3

Anyway, I'm not really expecting anybody else to use Blio, because either you've already hacked something similar and better-suited yourself, or you're not the target group for text-file based blog "engines". If you do want to use it, you'll have to figure out how it works by either try-and-error, reading the code, or shaming me into adding some docs.

3 Build-your-own of course, but later.