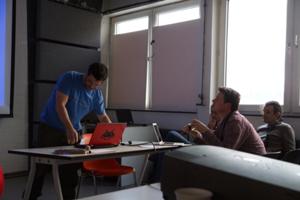 Last week I spent a few very nice and enjoyable days in Berlin at German Perl Workshop. I stayed at friends, who even provided me with a bike (thanks to KaWh & KlKa!) so I could properly represent Bicycle.pm.

Things I learned at German Perl Workshop in Berlin:

Here are the slides of my two talks:

I hope that other authors will also publish their slides, preferable in the workshop wiki. The picture of me (failing to connect my laptop) is taken from here.

A big "THANK YOU" to the organisers, the sponsors, the speakers and the attendees! Next year's German Perl workshop seems to take place in Hannover. We'll see if I'll make it there...