Wow, I'm already back in Vienna for 4 days, but work, the yearly Vienna.pm Barbecue and family kept me from finishing this blog post. Until now!

YAPC::Europe 2014 in Sofia was (again) a wonderful experience. I did two talks (Code I'm proud of, OX & AngularJS) and choreographed a lightning talk: "The OAuth Dance" (video is now online!), thanks a lot to the dancers: Grrr, John, Maroš & Tux 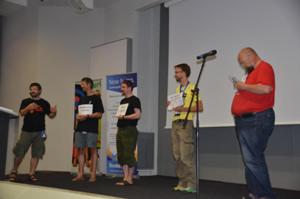 Image by Marian, but I'm really looking forward to the video. The Dance was fun, but I'ma afraid it did not help a lot to make OAuth2 any clearer :-)

Things I learned at YAPC::Europe 2014 in Sofia, in no particular order:

I assume I learned more, but already forgot it, so I have even more to learn at next year's YAPC::Europe in Granada!

Thanks, thanks thanks to the organizers, sponsors, speakers & attendees!