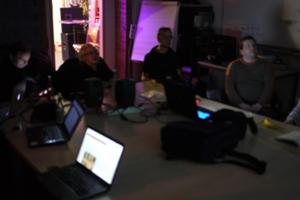 Tonight we had our first TechMeet of 2019. There was a slight focus on parsing: Daxim talked about "Parsen mit Perl", in preparation for his talk at the German Perl Workshop. Robert also talked about parsing, showing us some parsers he wrote using Parse::Yapp and Parse::RecDescent. Throughout the talks we had interesting discussions about parsing, lexing, grammars, syntax, semantics etc. Quote of the day (by Daxim): "At the end you don't get a parse-tree, but a parse-forest"0

I also (finally) ran our script to calculate meeting dates, with the following results:

We (well, Daxim and me) discussed some "Verein" interna (Generalversammlung) and made plans for a slightly bigger event in November (not an Austrian Perl Workshop...)

And that was this month's meeting!