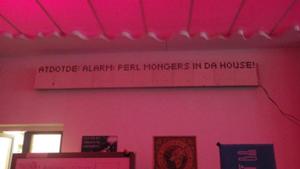 This week we had the 21st(!) German Perl Workshop, this time in Munich, which is just a short0 train ride from Vienna. I stayed in a hotel very near the venue and opposite of a huge fitness center with an all-glass front, so one could watch people slave away on the treadmills. The pre-conf meeting took place at a Lebanese restaurant, where Jens and Wendy treated our table with a 40-plate meze "starter".

This was followed by three days of Perl talks, ranging from very technical to artsy and political.

I talked with a lot of people about the future of YEF and how we want to organize future PerlCons (the current one is doing very well, thanks to Andrew). Three days immersion in good Perl vibes finally motivated me to continue those discussions on the YEF venue mailing list. If you're interested in the future of Perl events in Europe, please join the list, post your thoughts and (finally) do some actual work!

One thing I think we should do is to promote our events more to people outside the Perl community (esp. to local hackers). To validate my hunch that we usually have a lot of talks that are not only relevant / interesting to Perl hackers, I analyzed the talks. I put them into 4 categories: Perl, Perl6, other tech, and culture. Then I assigned each talk to one or two of those categories (100% or 50%), erring on the side of Perl, and calculated the percentage of the talk minutes by category.

At least 40% of the talks could be of interest to people who do not primarily care about Perl (and I assume that some of the Perl content can be of interest, too). So maybe we can get out of our echo chamber and promote our events (or at least parts of them) explicitly to non-Perl groups. Hm, and I guess that the inverse is also true: Visit some non-Perl events!

I did three talks (I did not expect all of them to be accepted, but there were enough talk submissions to open up a second track, so they choose all of them..):

.. to the orgas, speakers, attendees and sponsors!

Also thanks to Lee and EPO for managing the video recordings in the main room and simbabque for macgyver a recording rig in the second room. I'm curious how the videos will turn out...

Looking forward to next year's German Perl Workshop in Erlangen!