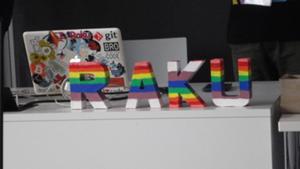 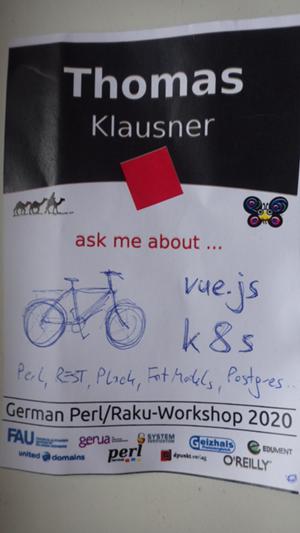 "A long time ago, in a venue far, far away"0 we met for the German Perl Workshop 2020 in Erlangen.

Besides the usual benefits of meeting old and new friends (face to face!) and talking about Perl, computers and lots of other stuff, the workshop also features a lot of interesting talks and very professional video recording setup. So if you're currently stuck at home you can watch the recordings of the talks.

Some of my favorite talks were:

I also liked the badge with the "Ask me about.." blank space. You can see my artistic rendering to the right,,,

Speaking of artistic renderings, another highlight were the sketch notes done by Wolfgang Kinkeldei, for example this one of my white label talk.

Some random quotes from my notes

I did a talk on white labeling strategies and hosted a discussion on Perl Intro Curriculum. For the latter I also set up a github group https://github.com/Perl-Intro-Talks/Perl-Intro-Talks, and planned to work on it in the last weeks, but the whole Corona shutdown and following remote work setup took all my time. I do still plan to work on this issue!

Thanks to the orgas, sponsors, speakers and attendees we had another nice Perl Workshop. The next one will take place in Leipzig on 24th to 2th. March 2021. Looking forward to it!

0 At least it feels this way after two weeks of Corona lock down...