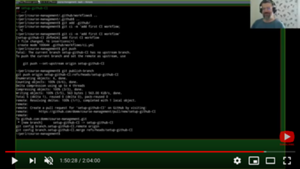 Today I was invited to join Gabor Szabo for a live pair programming session, where we worked on adding Docker and CI to his course management application. You can view the video of our informal competition who is the worst typist here.

At first I was bit skeptical about the concept of live coding (who wants to watch people google^w code for two hours?), but in the end it was a funny and informative (for me) session. Maybe I'm just totally deprived of live human interaction (thanks, Corona), but I think I'd enjoy similar sessions also under normal circumstances.

If you're interested in the Dockerfile aspect of this session, may I point you to my talk Writing a good Dockerfile for a (Perl) app from the 2020 Perl Conference, where I elaborate on some of the finer points, and with better preparation than today :-)

Oh, and this reminds me that I should submit a talk (maybe on docker-compose?) for this years Perl & Raku conference. The CfP runs until tomorrow, so I better hurry.