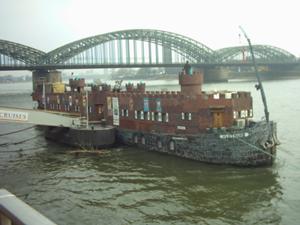 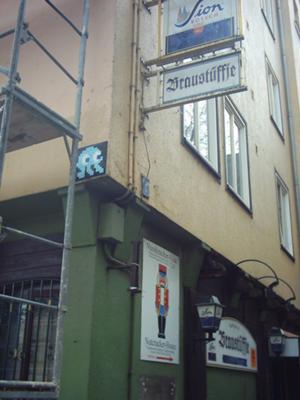 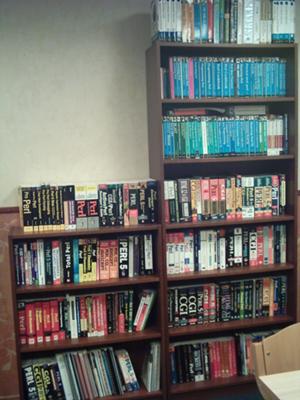 After the nice 0100000 party, I took the sleeper train to Köln on Friday night. By some very lucky coincidence I got a 4-person compartment on my own - yay!

The next day I walked a bit through the central area of Köln (around the Cathredral). Quite nice for a german city... I discovered a space invader and a fake medevial castle on a boat (some kind of museum).

In Brussels, I went straigth to FOSDEM where I met a few Perl people (Mark, Juerd, Leon, ..) at the Perl 6 talk. I spend most of the day talking with them. In the evening we had yet another birthday "party" (together with Leon) - and to my big surprise I discovered that I actually like Cherry Beer (because it doesn't taste like beer I guess)

Sunday night I drove with Wendy & Liz to their place in Echt, where I'm stayed a few days. It was very nice and they were very hospitable. Jonathan arrived from Kiev, and we did a small bicycle tour around the neighbourhood. I'm switching between working, preparing slides, chatting & playing Fluxx. We also visited a cave (!) in the Dutch mountains (!!)).

On Wednesday, I went to Mark & Cleos place in Arnhem. Their 1.5 years old son Tycho is very cute (but I'm still happy that my kids are already older...). I managed to get most of my slides done while staying there.

On Thursday evening we prepared the venue for the Dutch Perl Workshop (including setting up Wendys huge collection of Perl books). Then a aprox 10 attendees had some chinese food at Marks place. Then we went back to the venue, for more preparation, Fluxx and Whisk(e)y.

A tiny bit after midnight I was done with all my slides (even for the talk I only agreed upon a few hours ago, and a lightning talk), so I started working on Acme::ReturnValue. After finishing a first version I want to bed way to late.

The workshop itself was very nice. Jonathans talk on Perl6 Internals was very interesting (and it prompted me to install Perl6 on my laptop - hard to belive, but things like

I used my new wireless presenter thingy to remote-control my computer during my presentation, which was very nice.

The evening was spend (as usual) with Fluxx, Whisk(e)y and Cake. I very much enjoyed my stay in the Netherlands. Everybody was very hospitable and I had a lod of fun speaking fake dutch

My journey back home was a little bit stressy, because severe storms caused some train delays. I got to Duesseldorf in time, but my sleeper train from there to Vienna was late. And then sort of cancled. We had to board a train to Italy, and change to the train to Austria around midnight. Pff.