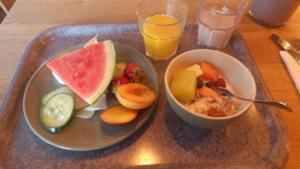 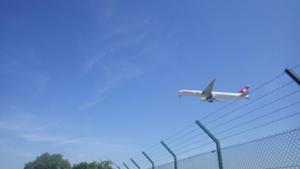 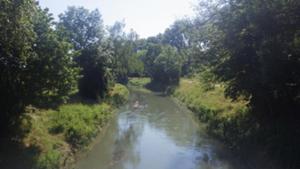 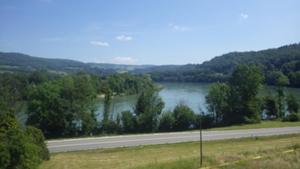 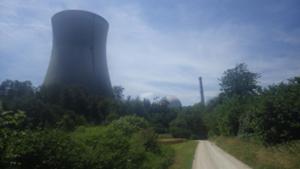 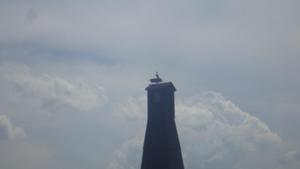 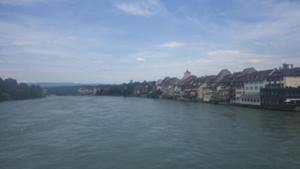 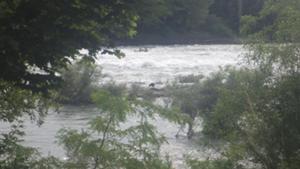 This day was powered by Google. Or at least by the breakfast I got there, thanks again to Koki.

After leaving Zürich (leaving a big(ish) city is always the most complex part of a bike trip, as it's rather easy to find the center of a city, but rather hard to find the correct one of the hundreds of possible exit roads..) I went past the airport (with planes taking off right over my) and cycled along the very pleasant river Glatt nearly up to the point where it joins the river Rhein. Unfortunantely, the Euro Velo 6 is not running right along the Rhein (at least the first ~20km), so there were several climbs and some sections on a street with medium-heavy traffic. Later it got better and the cycle path went right along the river through woods (and right next to an atomic power plant...), but those parts where not paved. Always something to complain about. Did I mention the heat? Though while riding I don't really feel the heat, as all the sweat evaporating in the slipstream ("Fahrtwind") does a good job keeping one cool, but I had to stop every few hours to apply sunscreen...

After a quick shortcut through Germany I entered Basel (at ~15:45), where I stopped for an ice cream, as I was running low on energy. From there I rode some more kilometers north, again entering Germany (all hail the EU for making border crossings a non-issue (at least inside Schengen)), and this time on a rather nice segment of bike route, going right next to the (sort of flodded) Rhein, through some woods (though again not paved), until I called it a day at 18:30 and stopped at a random town (Bad Bellingen) in the first hotel that crossed my way. According to my bike computer, I did 154.54km in 7h41m, with an average speed of 20.9km/h.

The GPX tracking broke down for quite a long stretch today (which is strange, because I can see the track on the Garmin, but not in the exported gpx file), so the following route is not 100% what I rode.