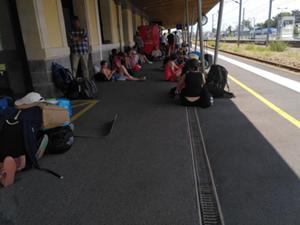 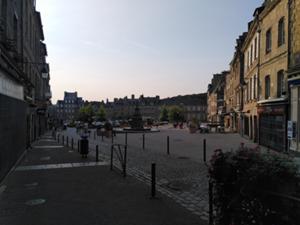 Our plan was to go from Perros-Guirec to Lannion by bus, take another bus to Guingamp, and from there a train to Rennes and on to Saint Melo arriving there in the late afternoon, just in time for some nice swimming on this hottest day in the year (or ever?).

But the train from Guingamp to Rennes had a bit of a delay, which after some time was explained by a fire along the train line. The delay was bumped up to 1 hour, to 2 hours, while we where sitting in the train parked on the platform, with air-con sometimes turned on, but most of the time not. So it was hot. It became quite clear that we wouldn't catch the last train from Rennes to Saint Melo, so we decided (after ~3 hours melting in the heat) to book a hotel room in Guingamp, spend the night, and hope that the train issues will be sorted out the next day.

The hotel was right next to the train station and cheapish. The bathroom was so outdated (brown porcelain and brownish tiles) that it would probably could be considered hip again (if situated in a boutique hotel in a proper city...)

When we came back from a walk through Guingamp (which turned out to have a nice medieval center) and some Kebab / Burger as ~21:30, the crowd at the railway station was finally able to board a train to Paris (with approx 7 hours delay!)

PS: The first train disaster was our sleeper train to Paris getting canceled due to a strike...