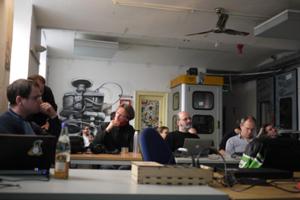 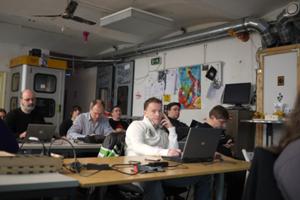 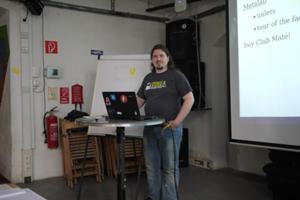 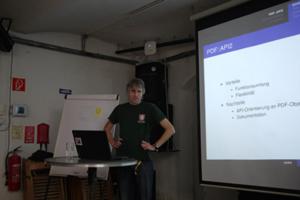 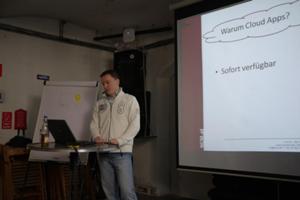 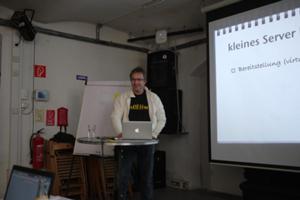 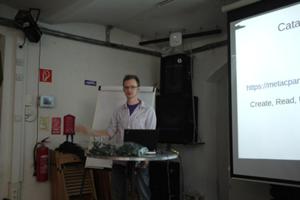 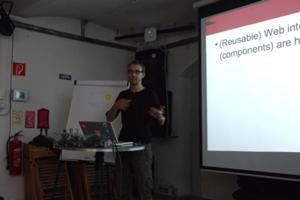 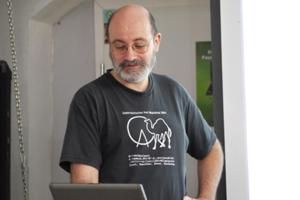 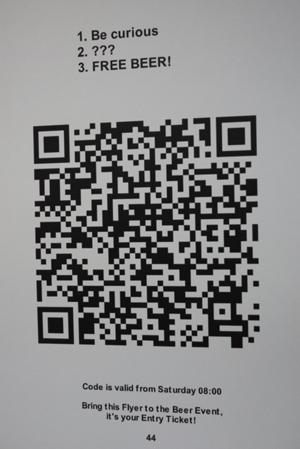 This Friday and Saturday we had yet another Austrian Perl Workshop. There were about 25 participants, including several new faces, thanks to the Essential Modern Perl Track on Saturday.

On Friday I started the "Applied Perl" track with a talk on DBIx::SchemaChecksum. Racke continued with various ways to handle & generate PDF. Daxim talked about the incredible amount of fun to be had with Collations. I always liked the fact that in German there are in fact two ways to sort names (telephone-book-style and regular). Daxim even donned a proper tin foil hat when he told us the dark secret behind the ẞ conspiracy (blame German type setters in the late 19th century).

After the break Denis showed us how to deploy Perl code in the cloud. He was even brave enough to do a live demo using OpenShift (which reminded me a lot of dotCloud). Wolfgang continued the deployment theme with his talk on Provision-DSL, a tool he's using at work to make deployments easy. I then continued with a slideless walk through and live demo of a small Plack download server I recently wrote for Ö1

After lunch (free Sandwiches !) David presented CatalystX::Resource, a set of CRUD-Roles for your Catalyst controllers. The last proper talk on Friday was "Commandline applications in a breeze" by Maroš, who showed us why adding command line frontends to your modules is a good idea, and how MooseX::App makes it even easier to do so (if you're willing & able to take the performance hit...)

The rest of the afternoon was spend with various Hackathons (though I'm not sure if anybody actually hacked anything), chatting with other attendees and listening to Nick rant on Perl implementation details (at least that's what I think he was ranting on, as I was standing ~10 meters away chatting with Stefan). For dinner a smaller group went for Tappas, beer, wine and some more chatting.

Saturday was dedicated to the "Essential Modern Perl" track, where we (Vienna.pm et.al.) tried to provide an update on Modern Perl to people who might not be too involved in the community, and thus lag a bit behind on the current shiny. After waiting a bit on the only person with the key to the Metalab who shall not be shamed^W named here but who has an incredible amount of UTF-8 in his rather latin1-ish (or even ascii!) name, we started with an improvised talk on CPAN (by me), as Rene, who should have given a proper talk, was ill.

Daxim continued with an intro on Unicode and UTF-8 (or utf-8?) handling. Maroš gave a two-part Moose talk using bicycles as the model of the class(es) to implement. This worked very well, and we got to see a lot of interesting bikes. Michael talked about DateTime and date and time handling in general (again proving what I've recently read on twitter: "If you don't hate time zones, you're not a real programmer.") Peter (wearing a vintage 2004 Austrian Perl Workshop t-shirt) continued with a talk on testing, Test::* and Devel::Cover, followed by an introduction to Mojolicous by Roland.

There was no organized lunch (but a very quick Vienna.pm general assembly), so I had a falafel sandwich from some nearby kebab hole-in-the-wall shop. Still good. The afternoon was dominated by Daxim, who did three more talks on Email, DBIx::Class (where I missed the killer feature of result set chaining (but maybe I just wasn't paying enough attention due to finishing some slides)) and Web Scraping (where I learned about Web::Query). I gave a very rushed and slightly chaotic talk on Plack (using slides provided by Leo Lapworth) and a still rushed but not so chaotic (I hope) talk on Catalyst. The last talk was an Intro to Dancer by Racke.

There were several attendees who weren't Vienna.pm regulars, so I think the plan behind the Essential Modern Perl track worked out. I still think it would be a good idea for the Perl community to have some up-to-date slide sets on core topics, so local user groups could set up Perl Intro events (as part of a workshop, or "standalone"). We now collected a few slide sets, but not enough (dear speakers: please add links to your presentations to your talks and/or post them here)

sipwise, who sponsored the event and who are currently looking for developers etc, handed out flyers containing a qr-code and some hints on free beer. If you were curious enough (and I was) you could scan in the qr-code (a bit of a challenge without a smart phone, but my Lumix and zbarimg were also able to decode it...). This yielded some Perl code, which when run spit out an URL (containing a unique code). From there you had to solve a small SOAP riddle (and I have to say that SOAP::Lite is a lot better now than in 2007 when I was forced to use it the last time), followed by some reverse engineering of an obfuscation. In the end one could get an invitation to a free beer event sponsored by sipwise. Several people tackled that challenge, so I'm curious who will show up at the event. sipwise++, nice idea and more fun than just being handed a flyer saying "We need coders, please apply"

We had yet another nice workshop, even though we did not put too much effort into organizing it (c.f. the lack of t-shirts and social event). As the venue was free, we could host the workshop using very little funds. I think if we would have spend a bit more time on organizing the event and on marketing it in various not-so-common places, we could have attracted more people from outside the community. Maybe this works out next year, as we're planning on doing another Austrian Perl Workshop in 2013!

Thanks to the speakers, the attendees and the sponsors: $foo magazine, sipwise & 123people