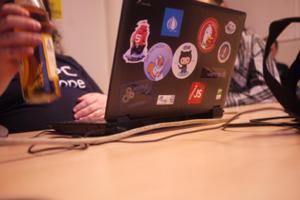 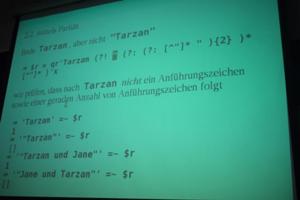 Lars talked about some regex tricks to match Tarzan but not "Tarzan". Interesting topic, and he showed some interesting solutions, though I do not think it's a good idea to translate technical terms like "negative look-behind assertion" to German "negativ rückschauende Zusicherung". BTW, the best solution (I remembered) is qr/ "Tarzan" | (Tarzan) /x

Next I talked about Measure::Everything. Slides are here. Alex and pepl both asked why we are not using structured (JSON) log messages to generate stats. Honestly, I have to say that I did not think about this, mostly because we're not using structured log messages. I also have a gut feeling that I like to keep logging and stats separated. Yes, they are related, and more often than not I have a generate a log message in a piece of code, and then count some stats in the next line. Still, I think that Measure::Everything has it's merits.

The last talk, by Maroš wasn't really a talk, but rather a hands-on session about using a small infrared device (connected via USB) with Perl. After a short intro on how IR works (using the whiteboard), Maroš handed out a few small devices, which we connected to some laptops (one if which was mine, which was still connected to the projector). After some fiddling with permissions and installing some deps, I could fire up some code provided by Maroš, and people would flood my screen with data generated by various remote controls (also provided by Maroš). Fun!

We ended the evening at a "Irish Pub" (in quotes, because not very Irish, or even a Pub) with burgers, beer and cider (drinks sponsored by Geizhals, who BTW are looking for a junior and a senior Perl developer)