Two weeks ago I got myself a new laptop (well, I ordered it a month ago, but it took some time to assemble and ship), a Thinkpad T430. It's a nice machine, works good with Debian (with not too much fussing), has a long battery life, backlit keyboard, bla bla bla.

Only downside: it's boring as hell. Just a black box with some annoying Lenovo logo. My previous laptop was a Dell XPS 1330, which I used for four years. It's still a good machine, but it started to show it's age, and the next-day support contract ended a year ago. It's now going to be used by the kids for playing games and doing productive stuff.

Anyways, I got the Dell with nice and shiny pink cover (the same that's also used by Penny in the Big Bang Theory). I applied a space invaders against sexism sticker to cover up the Dell logo (I don't get payed for displaying their logo, so I don't display it): 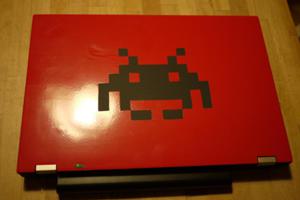 Lenovo didn't offer any fancy design options, so I had to get creative. After some old school cut'n'paste involving scissors, a (fake) Stanelymesser (aka x-acto knife), the iron ruler, a cutting board and some red self-sticky home decoration foil I got a few months ago to fix up a cupboard (which BTW was also used on the Sodarad), my laptop now sports a nice, big, black-on-red space invader and no more logos: 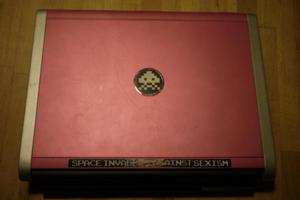 As I had to install a completely fresh Debian testing, I also set up a clean Perl environment using several different perlbrewed Perls (for different projects that in fact use different (i.e. old & outdated) versions of Perl), and even more local-libs. There's a small bug in perlbrew that keeps me from complete happiness, but my current setup is still a big improvement to my previous chaos. I might even write a future blog post about it...